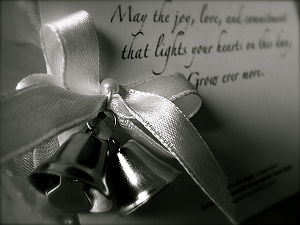 Due to the passage of Proposition 8, our state constitution no longer legally recognizes marriages between same-sex couples. Unitarian Universalists ministers have been performing same-sex marriages since the 1960s. That proud tradition remains, while we continue to advocate for the legal recognition those relationships deserve.

For lesbian couples or gay couples interested in a religious ceremony, we distribute a list oflocal clergy and other religious wedding celebrants [PDF; 48KB] of various faiths who welcome the opportunity to help you celebrate your wedding as spiritual union.Congratulations and mazel tov!

A public service of Unitarian Universalist Congregation, Santa Rosa. Updated versions of the celebrant list are maintained at www.uusantarosa.org/celebrants, or available upon request at the County Clerk’s office. Additions and corrections are encouraged.

To inquire about holding your wedding or reception at UUCSR/Glaser Center (glasercenter.com), contact David Templeton at (707) 568-5381 orglasercenter@uusantarosa.org.