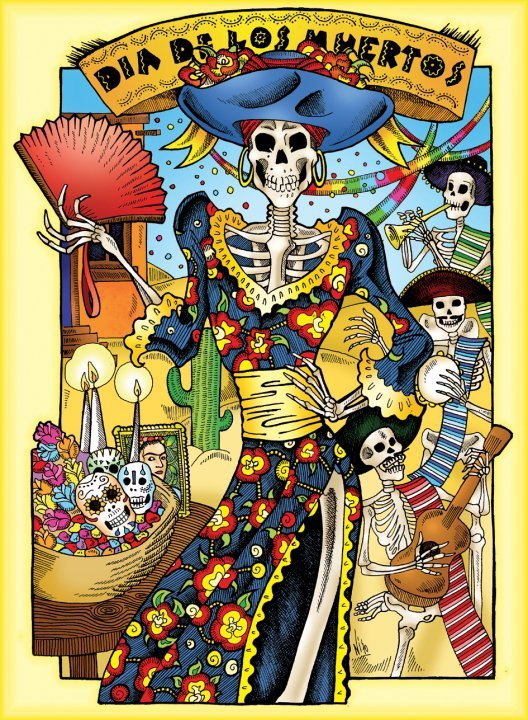 The first time I ever made-up my face in the Dia de los Muertos fashion, I felt so powerful! The instant I stood back and saw the reflection of my face with a skeletal mouth, I felt in some small way, like I was facing my own mortality. Just under the surface, there is – was, my undeniable future, but not today, not right now… Ha ha!

One of the most intriguing elements of Dia de los Muertos is the Calaca or La Calaveras Catrina, a well-dressed and decorated skeleton who dances and laughs in the face of death. I love so many aspects of what I’ve learned about this ancient tradition of honoring the dead by beautifully decorating their grave or an ofrenda (altar) and inviting them to join the living by enticing them with their favorite foods.

I was so pleased when here at UU we included a version of this practice at Sunday service. A few years later while deepening my spiritual path I found out that the Pagan tradition also has a celebration that honors our beloved dead called Samhain. Pagans and some other practices believe that this is the time of the year when the veil between the living and the dead is thin. It is therefore a time to invite your beloved dead to walk with you for a time. The Samhain ceremonies that I’ve attended were focused on spending time with our beloved dead and also included honoring the ancestors. The tradition I follow encourages us to decide for ourselves which ancestors we invite for guidance.

When my brother died in 2006, I struggled deeply with how to come to terms with losing him. Honoring him at Samhain has now become a practice that gives me space and time set aside to remember him. I bring Doritos to place by his photo on the altar and invite him into my life not just as a memory but as a part of my life. I place him today on the altar as an ancestor.

Pagan celebrations often include an altar or ceremony calling forth and honoring the 4 directions of the compass and the 4 elements of Air, Water, Earth, and Fire.
• Fire, this important element that warms us and lights our way.
• Fire, that sometimes tricks us into believing we have power over it.
• Fire, that can change an entire house into a pile of unrecognizable rubble and ash.

As with many of us these days, my life now has a defining tab of “before the fire” and “after the fire”.
In case you hadn’t heard, my mother lost everything to this fire. Everything but her life.

When we went last Friday to see what the fire might have left behind, the most noticeable thing was the mangled metal bedspring perched on top of the ashes. That was the bed she had been sleeping in half an hour before the fire ravaged through it. My brother’s ashes were in that house, cremated a second time.

Everything is ash now. So many things that remind us of memories from the past- ash. So much loss, so much transformation. We lost the things, but it’s true that we didn’t lose the memories themselves.

For century upon century, before anyone could write anything, our ancestors used stories and songs to help each other to learn, to have some context of the past and to keep history alive. It is our memories and our stories that matter most.

As before, seeing my face in that reflection, the fire has again reminded again about my mortality, and the awareness that when all the objects and even the people are gone, what we still have are our memories. And that’s not nothing. When we remember our loved ones, when we speak their names, tell their stories, keep them close in our hearts, that is how we honor them and keep them alive. As a pagan saying goes, “What is remembered lives”. My brother lives. Our ancestors live. What is remembered lives.